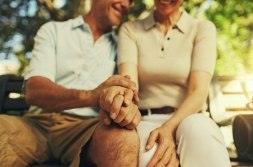 Both married men and unmarried men of a certain age, may remember the tune, if not the words:

Much has changed, obviously, since the horse and buggy days. And when it comes to marriage, there have also been enormous changes since Sammy Cahn penned his romantic lyrics in the Ozzie and Harriet era. Many people find love without getting married, and many marriages turn loveless and hostile as divorce rates soar. Single parenting is now common, and society is becoming increasingly comfortable with various patterns of cohabitation.

The many social, economic, psychological, and spiritual ramifications of these huge changes have been the topic of much discussion and debate, and more will follow. Without treading into these deep waters, though, it's also useful to ask how marriage itself affects men's health.

A major survey of 127,545 American adults found that married men are healthier than men who were never married or whose marriages ended in divorce or widowhood.
Men who have marital partners also live longer than men without spouses; men who marry after age 25 get more protection than those who tie the knot at a younger age, and the longer a man stays married, the greater his survival advantage over his unmarried peers. But is marriage itself responsible for better health and longer life?

Although it's hard to be sure, marriage seems to deserve at least part of the credit. Some have argued that self-selection would skew the results if healthy men are more likely to marry than men with health problems. But research shows the reverse is true: unhealthy men actually marry earlier, are less likely to divorce, and are more likely to remarry following divorce or bereavement than healthy men.

Another potential factor is loneliness; is the institution of marriage linked to better health, or is it simply a question of living with another person? Although studies vary, the answer seems to be a little of both. People living with unmarried partners tend to fare better than those living alone, but men living with their wives have the best health of all.

Numerous studies conducted over the past 150 years suggest that marriage is good for health.
More recently, scientists have begun to understand why married men enjoy better health than their single, divorced, and widowed peers. But before we turn to the why, let's look at how marriage affects specific diseases, including America's leading killers, cardiovascular disease and cancer.

In the 1980s, several studies suggested that men whose wives had more education than they had were more likely to die from coronary artery disease than men married to less educated women. With more and more women getting advanced degrees, that might give some single guys pause. But a 2002 study found that the more educated a man's wife, the lower his risk for coronary artery disease and risk factors such as hypertension, obesity, high cholesterol, smoking, and lack of exercise. And a 2009 study reported that men married to more educated women also enjoyed a lower death rate than men married to less educated women. In the contemporary world, smart wives promote healthy hearts.
Marriage and the heart

If marriage protects health, the heart would be a likely beneficiary. Japanese scientists reported that never-married men were three times more likely to die from cardiovascular disease than married men. And a report from the Framingham Offspring Study also suggests that marriage is truly heartwarming. Scientists evaluated 3,682 adults over a 10-year period. Even after taking major cardiovascular risk factors such as age, body fat, smoking, blood pressure, diabetes, and cholesterol into account, married men had a 46% lower rate of death than unmarried men.

In the Framingham study, marital happiness did not seem to influence the overall protective effect of marriage.
But in other studies, marital unhappiness and stress have been linked to an important cardiac risk factor, hypertension. Over time, in fact, marital stress is associated with thickening of the heart's main pumping chamber, but job stress does not take a similar toll on the heart.

Coronary artery disease and hypertension are among the most important causes of heart failure, a chronic disabling condition that results when the weakened heart muscle is unable to pump all the blood that the body's tissues need. But even after this serious problem has developed, a supportive marriage is associated with improved survival.

The well-established links between stress, depression, social isolation, and heart disease make it easy to see how a good marriage might protect the heart. But cancer is a different matter. Indeed, there is little evidence that marriage reduces the overall risk of getting cancer. Still, marriage can influence the outcome. For example, a study of 27,779 cancer cases found that unmarried individuals were more likely to have advanced disease at the time of diagnosis than married persons. Unmarried patients were less likely to receive treatment than married patients — but even among people who received cancer therapy, marriage was linked to improved survival. Patients who have intact marriages when cancer is diagnosed have better survival than patients who are separated at the time of diagnosis.

Prostate cancer is a particular concern for men.
To find out how marriage affects survival, scientists from the University of Miami investigated 143,063 men with the disease. Over a 17-year period, married men survived far longer (median 69 months) than separated and widowed patients (38 months); men who had never married had an intermediate survival rate (49 months). And researchers from Harvard and UCLA have identified similar survival benefits for married patients with bladder cancer, a predominantly male disease.

Although the data are sparse, marriage appears to have a positive effect on a variety of health outcomes. Mental health is the most prominent; married men have a lower risk of depression and a higher likelihood of satisfaction with life in retirement than their unmarried peers. Being married has also been linked to better cognitive function, a reduced risk of Alzheimer's disease, improved blood sugar levels, and better outcomes for hospitalized patients. In contrast, widowhood boosts the likelihood of sexually transmitted diseases in men, but not women.

It's often said that old married couples come to resemble each other. That may or may not be true, but according to Italian researchers, married couples do have similar cardiac risk factors. In their 2009 report, the scientists reviewed 71 earlier studies that covered more than 100,000 couples. All in all, the spouses demonstrated many shared risk factors, including hypertension, diabetes, cholesterol, obesity, and smoking. Some of the similarities can be explained by the tendency for people to choose spouses like themselves, and some of the shared risk factors depend on lifestyle habits partners have in common.
That's why Australian doctors have reported success with a program that seeks to improve nutrition and exercise habits in both spouses simultaneously. That's couples therapy with a new twist.

Although the data are sparse, marriage appears to have a positive effect on a variety of health outcomes. Mental health is the most prominent; married men have a lower risk of depression and a higher likelihood of satisfaction with life in retirement than their unmarried peers. Being married has also been linked to better cognitive function, a reduced risk of Alzheimer's disease, improved blood sugar levels, and better outcomes for hospitalized patients. In contrast, widowhood boosts the likelihood of sexually transmitted diseases in men, but not women.

Because women live longer than men, women are far more likely to lose a spouse than are men.
But spousal bereavement is actually more serious for men, and a study from California tells just how serious it is. The study did not measure the psychological and socioeconomic burdens of bereavement. Instead, the researchers focused on another impact of spousal bereavement, the mortality of the surviving spouse.

The study tracked 12,522 married people over a 14- to 23-year period. During that time, 1,453 men and 3,294 women lost their spouses. Subsequently, 30% of the bereaved men died themselves, while only 15% of the women succumbed. Healthy men who lost a wife were 2.1 times more likely to die during the study period than healthy men who were not bereaved; for men with preexisting medical problems, bereavement boosted the rate of death 1.6 times. The risk was greatest from seven to 12 months after the loss, but an elevated death rate persisted for more than two years. Shakespeare was right when he wrote of "deadly grief."

Research from around the world confirms that the death of a spouse increases the likelihood of illness and disability in the surviving spouse, and that men are more vulnerable than women. One reason that widowers fare so poorly is that nutrition and other health habits deteriorate when men are on their own; even a wife's hospitalization is hazardous to her husband's health. Another factor is social isolation.
And a study of 1,667 men in the Boston area linked the death of a spouse to a decline in testosterone levels comparable to the drop that occurs during 10 years of aging.

Do the health benefits of marriage extend to same-sex spouses or partners in civil unions? Because such parings are uncommon and new in the U.S., no American data are available. But same-sex partnerships were sanctioned in Denmark in 1989, and a study evaluated 4,914 men and 3,419 women who entered such relationships between 1989 and 2004. The men who were in same-sex partnerships before highly effective anti-HIV drug therapy became available in 1995 had a high mortality rate. Women and men who entered same-sex unions after 1995 had mortality rates similar to the general population after a small excess during the first few years of their union. But since the researchers did not compare the mortality rates of homosexual couples with those of unmarried gays and lesbians, it's impossible to know whether same-sex unions are associated with health benefits comparable to those enjoyed by married heterosexuals.

Good marriages promote health and longevity, but stressful and shattered marriages have the opposite effect, especially for men. Why?

The explanations fall into three categories: biological, behavioral, and psychological.

The behavioral factors are no less important. Unmarried, divorced, and widowed men don't eat as well as married men.
They are less likely to exercise but are more likely to smoke, drink excessively, and engage in other risky behaviors. In contrast, married men are more likely to get regular medical care and to benefit from a higher standard of living. But while senior citizens who live with a spouse get better preventive care than those who live alone, elders who live with an adult child do not get better care.

Loneliness, depression, and social isolation also contribute to the excess mortality associated with bereavement, divorce, or never having married. A Harvard study reported that socially isolated men have an 82% higher risk of dying from heart disease, compared with men who have strong interpersonal relationships. And the New England Research Institute reported that 66% of men rely on their wives for their primary social supports; only 21% rely on other people, and 10% have no such supports. Clearly, subtracting a wife greatly increases a man's risk of isolation

Many men marry for love, some for money, and others for a variety of personal and family reasons. Until now, at least, few have married for health. Should that change?

Not really. Happily married men might add health to the things they thank their wives for. Unhappily married men should work with their wives to reduce stress and improve their relationship.
But instead of marrying for health, unmarried men should try to achieve some of the health benefits they're missing. That means making wise choices about diet, exercise, alcohol, and other health behaviors. It means seeing your doctor even if you don't have a wife to drag you in, and it means seeking ways to reduce stress and build social ties and mutually supportive relationships.