How To Be Really Attractive Even If You Lack Physical Beauty 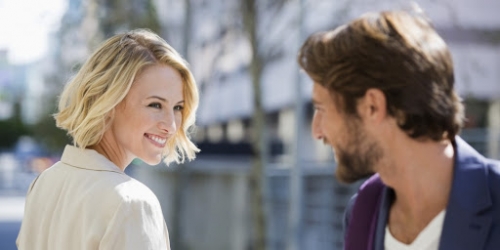 How To Be Really Attractive Even If You Lack Physical Beauty

Hannah and I were coworkers at one of the most famous hotels in New York City. We worked side-by-side, twelve-hours a day, six days a week.

Hannah and I got along well, but neither of us felt an attraction to each other. We didn’t share many interests, so I never thought of her as someone I’d want to date in the early days of our relationship.

But my feelings for her changed.

A bunch of us were planning an after-work get together. The crowd wanted to go bar hopping downtown. The few people who objected, including me, eventually gave in to the pressure.

Hannah proved the exception.
She surprised everyone by saying she’d go to the old-folks jazz bar down the street, alone if it came to that. A few in the group gave disapproving looks, but I loved that she defied the crowd and didn’t care what people thought. Her fearless individuality made her more appealing. We became good friends and even dated years later.

Our romance didn’t last, but that early experience triggered a realization that attractiveness encompassed more than just physical beauty. A pretty face or sculpted body might turn heads, but how you act and carry yourself attracts people long after an initial burst of infatuation.

Not everyone will find these behaviors attractive.
But I’ve discovered over the decades that people who exhibit these qualities find themselves admired, respected, and often desired.

1. Be willing to do your own thing even when it’s not popular.

It wasn’t that Hannah defied the clique’s leadership to go to a jazz bar that interested me. No, it was that she did so even though it made her unpopular — and she did it with fearless confidence. She resisted peer pressure and didn’t care how it made her look.

Sure, sometimes you need to compromise or give in to maintain group cohesion. Stubbornness is not an attractive quality. But pursuing your interests and expressing your individuality dials up your allure, especially when you do so in the face of disapproval.

2. Don’t get involved in petty nonsense.

If you watch group politics from afar, you often see puzzling behavior. The group seems to argue and fret over the most meaningless crap. It’s human nature, I guess, and we all succumb to it from time to time.
As an observer, it’s almost comical.

But if you’ve ever been in a relationship with someone who gabs about and stresses over trivial nonsense, you know how unattractive it becomes.

The attractive one recognizes pettiness and avoids it; they stay above the fray and involve themselves only to make peace when relations begin to redline. They’re the ones you count on to remain temperate when everyone else runs hot.

Remembering a birthday doesn’t make you attractive; everyone expects that of you. To stand out, be the person who makes it a habit of remembering odd interests and obscure details.

The attractive person does more than just remember; they’ll read that story on Greek mythology and then send you a quick note.

“Hey, I remember you telling me you’re a Greek mythology buff. I found this article and thought it might interest you.”

When you remember tiny details about someone’s life and thoughtfully use that information, it demonstrates to them that they matter to you.

When I was in eighth grade, we moved to a new school district. I made no friends during my first year. Bullies saw me as a low-risk target— anyone could pick on me without fear of retribution or objection by others.

There was one exception, an older girl who became my first crush.
When present, she would shame the bully until he stopped. Perhaps it’s just my experience, but since then, I’ve found this to be one of the most attractive qualities. Be the brave soul who stands up for others. Double points if you’re the first in the crowd to do it.

5. Be comfortable being alone.

A teenager or twenty-something may not find this attractive, but I think most anyone over forty would because it says something important about a person.

A partner comfortable being alone probably won’t hang on you once you start dating. They’ll give you the distance to do your own thing and express your individuality. They’ll likely enjoy personal pursuits, which adds to their intrigue.

A person who cannot spend time alone probably has issues we’d like to avoid in a mate. So, yeah, maybe it’s not that we older folks find this trait attractive. Perhaps it just removes a source of un-attractiveness.

6. Recognize and validate the good in others.

Compliments can be highly attractive or disgustingly unattractive.
Have you ever known someone who dishes out praise just to manipulate you or control a situation? That kind of behavior — even by a physical beauty — can render anyone ugly.

But complimenting someone when it’s warranted, sincere, specific, and devoid of personal gain makes you charming.

Avoid generic compliments like You have lovely eyes. Compliment someone based on something they do or maintain some control over. If you can validate someone’s skill, taste, or preferences, you’ll score a more significant impact. Make your praise ultra-specific; it helps point out that you’ve noticed the effort they’ve put in to better themselves or accomplish something.

I like the way you silenced that guy who tried to trap you in a contradiction — a great use of reverse-questioning. I can see you worked hard to master that technique.

7.
Let your actions advertise your greatness.

Our culture allows for self-promotion. In business, it’s a necessary component, but boasting about your awesomeness rarely attracts romantic partners or friends. Mostly, it just irritates the heck out of us.

Those who don’t speak of their accomplishments and good deeds exude a quiet self-assuredness. You get the feeling that it’s enough for them to know they performed a kind act or accomplished something impressive; they don’t need external validation to feel good about themselves.

Do great things, but avoid boasting about your deeds. The braggart repels, but the humble one attracts.

Is there something weird about you that you hide from the world? Perhaps you like to dress up in neon colors, but you’re afraid of what people might think. Or maybe you love half-sour pickles with spicy deli mustard — the most underrated food combination ever.

Years ago, before internet dating, I’d go to a Barnes and Noble Cafe and read. Every so often, I’d meet someone. My eye always landed on the confident but weird one. She had a stack of books on dancing alien monsters before it became cool.
Sometimes she dressed in business suits but read comic books.

Allowing your quirky traits to reveal themselves in public makes you attractive, not to everyone, but to some people. And even if it doesn’t, it at least makes you interesting.

Remember Hannah from earlier? She struggled with body issues stemming from a pressure-filled childhood. Her parents used to say, “Why couldn’t you be more beautiful, just like your sister?”

It wasn’t something she disclosed to everyone, but when we got to know each other well, she shared her history and struggles. When you let someone peak under the covers of your outer-shell, you put your trust in that person. You make yourself vulnerable.

Those of us self-aware enough to know we struggle with our own flaws will find that courage and honesty attractive. Sure, the perfect people out there will express their disgust. But it’s not your flaws that bother them; it’s their fear of letting others see through their facade. They lack the courage and resent that you possess it.

Ever meet someone who vomits every thought that passes through their mind? They’re like a novel that reveals the ending on the first page.
Where there’s no mystery, there’s often no interest.

For introverts, leaving a bit of mystery comes naturally to us. We’re often quiet, leaving something to the imagination.

When there’s a gap between what we know about you and what we want to learn, it makes us curious. If we’re curious enough, we become intrigued. And if you satisfy that intrigue to our satisfaction, it makes you attractive.

Be careful. Too much mystery can make you appear aloof and detached. A small amount makes you fascinating. It’s a delicate balance. Reveal enough to let people in, but hold back enough to make them want more.

The craving we call attraction both seeds and grows relationships, but it’s more than physical. Six-pack abs may disappear. Pounds may come and go.
And wrinkles, once they start, they keep coming.

Enduring attraction comes from how we conduct and carry ourselves and how we care for others.