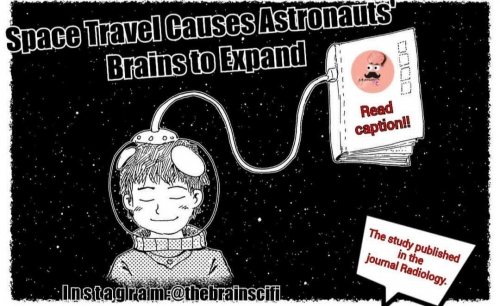 Do People Who Sleep Longer Have Higher Intellect? Read To The End

A majority of crew members aboard the International Space Station (@iss ) seem to experience swelling of the optic nerve, along with a surplus of fluid that expands the actual volume of their brains.
.
â€œWhen youâ€™re in microgravity, fluid such as your venous blood no longer pools toward your lower extremities but redistributes headward,â€ Larry Kramer, lead author of the study.
.
MRI brain scans of 10 male and one female astronaut taken before and after travelling to the @iss , showed that long exposure to microgravity caused expansions in their brains and cerebrospinal fluid (brain remained in its new state for an entire year postflight, according to the researchers).
.
Kramer said -"What we identified that no one has really identified before is that there is a significant increase of volume in the brainâ€™s white matter from preflight to postflight, white matter expansion in fact is responsible for the largest increase in combined brain and cerebrospinal fluid volumes postflight.â€
.
They also found that microgravity deforms and slightly shrinks the pituitary gland in the brain.

The changes in volume were comparable to patients who spent long periods of time in bed.
[Source:- Journal Radiology]