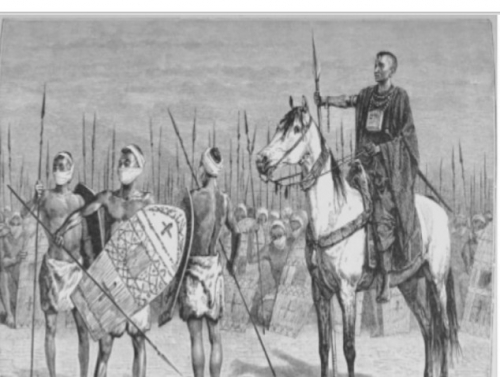 The Yoruba People Are Masters Of Warfare... Yorubas Humility Is Not Stupidly, Their Gentility Is Not Docility! Part 1

History has it that, the Fulani jihad led by sheik Usman Danfodio  that began in 1804 in Sokoto and spread gradually to put Hausa Land under the  Fulani and later moved down to the south of River Niger had serious effect on virtually the whole modern Nigeria.

Ilorin and its environs which were on the northern fringe of Oyo empire, was sacked by Fulani elements domiciled in that town in 1823, and it therefore became a satellite of the  Sokoto caliphate and the base where the jihadists attempted to penetrate, over power and islamise the Yoruba Land.

The Oshogbo war in 1840 showed that Yoruba used traditional technology to prosecute war and not just fighting like beast of the field.A brand of banana was planted during the war which bore fruits same day and the Fulani men ate and died upon consumption.

Advertisement
In the 1983 electoral war in Ondo  State, eggs were used as bombs on electoral commission buildings as recorded by Dare Babarinsa in "House of war"

Fulani elements from Ilorin were repelled by combined Yoruba forces with great inputs from Ibadan warriors, drawn from all supporting towns of Oyo, in line with the defence arrangement perfected by Yoruba leaders led by Alaafin Atiba, at the new capital, Agodoyo around 1837.

ugobaby (Basic)   3 mths
Ewo! It's true the Yoruba's are astute. I don't consider them the wisest tribe in Nigeria still. The Hausa's try their unity is their strength. The Igbos think Gra gra is wisdom. They should learn. My comment is not meant to hurt anyone pls
1
258
1652821482TheYorubaPeopleAreMastersOfWarfare...YorubasHumilityIsNotStupidlyTheirGentilityIsNotDocilityDavetech.html
583166

@ugobaby your comment is understandable dear friend. History had made it easy to look at the past in a way just to give us a prospect of the future and eventful realities about them.
1
11844
1652821482TheYorubaPeopleAreMastersOfWarfare...YorubasHumilityIsNotStupidlyTheirGentilityIsNotDocilityDavetech.html
252

Shortnotes (Basic)   3 mths
Wow. Please can't wait for the next one. Pejoweb needs to create a subscription button for individual users. So that we can get posts from users we like
1
16834
1652821482TheYorubaPeopleAreMastersOfWarfare...YorubasHumilityIsNotStupidlyTheirGentilityIsNotDocilityDavetech.html
583165