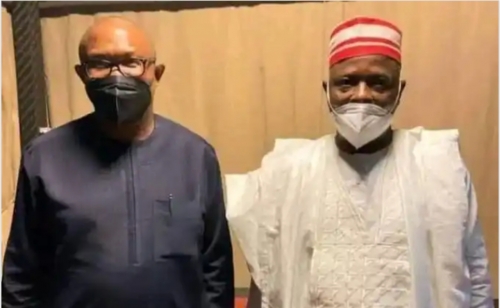 BREAKING: I Am In Talks With Peter Obi – Kwankwaso, Speaks On 2023 Collaboration

NNPP presidential candidate, Senator Rabiu Kwankwaso, says he is in talks with his Labor Party counterpart Peter Obi over the possibility of co-operation in the 2023 elections.

He made the remarks in an interview with BBC Hausa.

He said: “We are really talking to Peter Obi, or at least saying that the committee is working to look into the matter (and cooperate with him), and friends and family are coming to talk to us about it. ”

The former governor of Kano State said their collaboration was especially important as the APC and PDP had not fielded an Igbo vice-presidential candidate.

Obi and Kwankwaso’s collaboration is widely seen as a strong ‘third force’ against Atiku Abubakar of the Peoples Democratic Party, PDP and Bola Ahmed Tinubu of the All Progressives Congress, APC.

There are reports that the former Kano State governor will team up with his former Anambra counterpart, become the Vice Presidential candidate to challenge the two major political parties in the country.