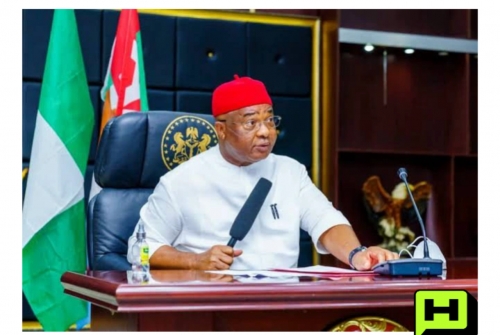 Kingsley ‘Kanunta’ Kanu, younger brother of the detained leader of the banned Indigenous People of Biafra (IPOB), Nnamdi Kanu, on Saturday alleged that Governor Hope Uzodinma is responsible for the mindless killings being witnessed in Imo State.

Newsbreak reports that according to Kanu, the “police is covering the atrocities”.

“Gov Hope Uzodinma is responsible for the killings in Okporo and Imo state in a whole, whilst the police is covering his atrocities,” Kanu wrote on his known Facebook page.

Attacks by armed men have increased in the South-east in recent times.

The Nigerian government has accused IPOB of being responsible for the deadly attacks in the South-east. But the group has repeatedly denied its involvement in the attacks.

The separatist group is leading an agitation for an independent state of Biafra to be carved out from the South-east and some parts of the South-south Nigeria.

Nnamdi Kanu, leader of the group, is expected to appear in court later this month for the continuation of his trial

Ajoke17 (Basic)   1 wk
God will see him through
0
10722
99982Gov.UzodinmaisResponsibleForImoKillingsNnamdiKanuNews_Naija.html
587122