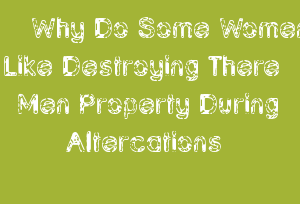 Why Do Some Women Like Destroying There Men Property During Altercations

Earning
~2.2 mins read
just want to share what happened over the weekend at my friend place I visited in Abeokuta.
it was on Saturday we were home cos we club all Friday nite....is fiancÃ©e was around.
Advertisement
.....dat was 2nd time I was meeting and seeing her .
Advertisement
....d first was Wen dey both came to lag for a friend wedding.....she looks decent and soft spoken..
Advertisement
...what happened I was in d living room sleeping while but of dem were inside the bedroom.....
so it happened that she ask my guy for somethings which he have been posting her...
Advertisement
..so she got angry dat Saturday cos he said he wasn't her father......she picked up his phone after ranting cos he was making jest of her and smashed it on the floor d screen broke slightly(Samsung 9)....
Advertisement
..but d smart gal have already kept her phone in her pocket....
Advertisement
.he wanted to smash her phone in return too so struggle started cos she held on to the phone ...so it the noise she was making calling my name that woke me up...dash into the room saw her on the floor her hair already ruff, bruises on her body already (my friend keep his finger nails)....he had hit her several times just to weaken her but she was strong.
Advertisement
.....I tried to separate dem but couldn't cos my friend was really high (he smokes weed alot)....so had to get his neighbor in cos dey also heard d noise bfr we could separate them.
he insisted on breaking her iPhone 8 even in d process he hit me twice Wen I was holding him back but I knew it was due to the highness..
Advertisement
...d lady left dat day.
on Sunday she came begging and even took d phone along dat she will fix it......I also pleaded on her behalf but my guy already open up to me dat he done with her.

So I don't understand why do some women like destroying there men property during altercations or moment of anger
And if u have experience D's before can u share wat u did or how u reacted cos I have also experience dat aswell while I was in school (dat a story for another day)..