Photos Of Female Nigerian Police Officer Many Say Is The Most Beautiful In The Force Goes Viral, People Gush

An adorable photoshoot of a Nigerian policewoman has gone viral and become an internet hot topic.

It is not just her taking the snaps in the police uniform that made the lady the cynosure of all eyes but her physical looks. 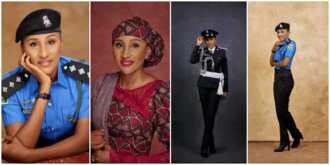 She is said to be a deputy superintendent of police by rank Photo Credit: Officers and Cadets worldwide

Photos of the policewoman identified as Fatima Abdulaziz was shared by Officers and Cadets Worldwide on Facebook.

The lady is reportedly a ranking deputy superintendent of police in Katsina state.

Just have money: Nigerians react as Rita Dominic and her man turn up to celebrate Mo Abudu at 57

In a viral photoshoot, Fatima 'slayed' in native wear and then in two different force uniforms.

Her brother prays she becomes IGP in future

It is the desire of her brother, Abdulaziz Bin Abdulaziz, that she rises to the position of an inspector general of police someday.

"Be admiring her beauty while they keep proping another fulani for IGP i just hope by then we would have discarded this over-centralised police for effective state/regional systems."

"Omo, and I wan join Nigeria police ooo. With someone like this . Nigeria go better. I believe "

"If she’s by the roadside begging, you want her body but criticize her for being lazy. She works hard to make a decent life for herself, more criticism……haba!!!!!!!!!"Comedian Osama's lawyers respond to Nedu's ex-wife's lawsuit, accuses her lawyer of ill-advising her

"This is the kind of things i want to be seeing in the north. Not denying the women folk education and professional careers."

Meanwhile, Legit.ng previously reported that a female police officer had become an internet sensation after her photos went viral.

The lady identified as Faith Jacob shared photos of herself in her professional attire and casual attire.

One showed her slaying in a red party dress while the other showed her rocking her police uniform. She captioned the post by saying that she can cover any emergency in any attire.