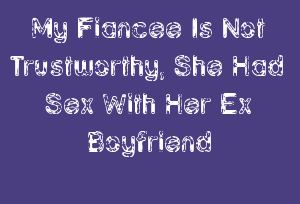 My Fiancee Is Not Trustworthy, She Had Sex With Her Ex Boyfriend

Earning
~1.6 mins read
Advertisement
I met my fiancee for 6months now and when I approached her she told me that she was in a relationship then, after telling her my intention she decided to quit with her ex and be my own.

I later found out that she went back and Bleep with her ex again.
Advertisement
When I found this out through the picture her ex posted in his timeline, she then admitted that she did it because she didn't know I was serious about the relationship and promised never to do it again. I pardoned her and ceased her connection with him by buying her new lines, except her glo line, which is linked to her account though she knew his number off head.
Advertisement

Pls friends what should I do because I love her and she claims to love me too and I have already introduced her to my people and they all like her.

Pls your noble advice is of utmost importance nw, thanks..
Advertisement