Coronavirus Is Been Declared A Global Health Emergency As Threat Rises

Coronavirus Is Been Declared A Global Health Emergency As Threat Rises

Earning
~12.8 mins read
The designation comes as the first person-to-person transmission of the virus is reported in the U.S

The World Health Organization declared the coronavirus outbreak a public-health emergency of international concern Thursday as the first person-to-person transmission of the virus was reported in the U.S.

The WHO designation, pointing to an increase in the number of cases, indicates that international public-health authorities now consider the respiratory virus a significant threat beyond China, where it originated last month. The move could further heighten the global response to the outbreak.

The agency made the declaration after a meeting of its emergency committee, which declined to do so last week. Since then, China, other governments and multinational businesses have taken emergency steps to limit the virus’s spread, including halting some travel to China.


A plane carrying more than 200 Americans arrived at March Air Force Base in Riverside County, Calif., on Wednesday. They have been screened multiple times and will be temporarily housed at the airbase. Photo: Matt Hartman/Agence France-Presse/Getty Images

Noting the WHO’s declaration, the State Department told Americans not to go to China, raising its travel alert to the highest level Thursday. It advised that people in China should consider leaving the country and said it requested that all nonessential U.S.
government personnel postpone travel there. The State Department advises the same “do not travel” warning for countries including Afghanistan and Syria.

In the U.S., a sixth person tested positive for the infection in the first case of human-to-human transmission. The patient is the husband of a Chicago woman infected with the virus whose case was reported last week. She had recently traveled to Wuhan, the central Chinese city where the coronavirus first emerged last month.

The U.S. Centers for Disease Control and Prevention and state officials emphasized that the overall risk for people in the U.S.
and in Illinois remains low. “This person-to-person spread was between two very close contacts, a wife and husband,” said Ngozi Ezike, the director of the Illinois Department of Public Health. “It is not spreading in the wider community.”

Public-health authorities said the WHO designation helps mobilize resources to contain the virus’s spread. The WHO’s director-general can make recommendations to the international community, though they aren’t legally binding.

WHO Director-General Tedros Adhanom Ghebreyesus said he was confident in China’s capacity to control the outbreak, which has sickened more than 9,500 people and killed 213—up from 170 a day earlier—mostly in China’s Hubei province, which surrounds Wuhan.

“Let me be clear. This declaration is not a vote of no confidence in China,” Dr. Tedros said. “I have never in my life seen this kind of mobilization.”

The number of infection cases in China surpassed the global total for severe acute respiratory syndrome, though SARS killed nearly 800 people after emerging in southern China in late 2002 and into 2003.

Since it gained the power, in 2005, to declare an international emergency, WHO had applied the designation to just five prior situations. The first was in 2009 in response to the H1N1 swine flu, followed by polio in 2014 and the Ebola and Zika virus outbreaks in 2016. It declared a public emergency for another Ebola outbreak in 2019 and faced criticism for delaying that decision.

At least 18 other countries or territories have also reported a small number of coronavirus cases, with Finland, India and the Philippines now reporting cases in people who have traveled to Wuhan, according to WHO.

In response to the virus, Russia has tightened its border with China and the U.S. announced plans for a second evacuation of Americans from Wuhan.
Companies including Tesla Inc. and IKEA temporarily halted operations in China.

The CDC has investigated 165 people in the U.S. for the virus, according to the numbers released Wednesday, and 68 have tested negative and been cleared. Over 90 cases are pending, and health authorities said that they expect additional cases.

The new Chicago patient lived with and was in consistent close contact with his wife. After returning to the U.S. on Jan. 13, she developed symptoms and was hospitalized in an isolated setting.
Once her husband also started developing symptoms he was quickly taken to the hospital. The patient, who has underlying health issues, is in a stable condition, health authorities said.

“It is clear that this virus is highly transmittable, and this assumption is based on the rapid rate of spread of this infection in China,” said Eyal Leshem, director of the Institute for Travel and Tropical medicine at Sheba Medical Center in Israel.

“When there is a public-health uncertainty, you always want to slightly overreact to make sure that you don’t miss a critical issue,” Dr. Leshem said. “Once you learn a little bit more about the risk and the effective steps, then you can scale back.”

Health authorities believe the virus spread while the first patient in Chicago was symptomatic, rather than before. 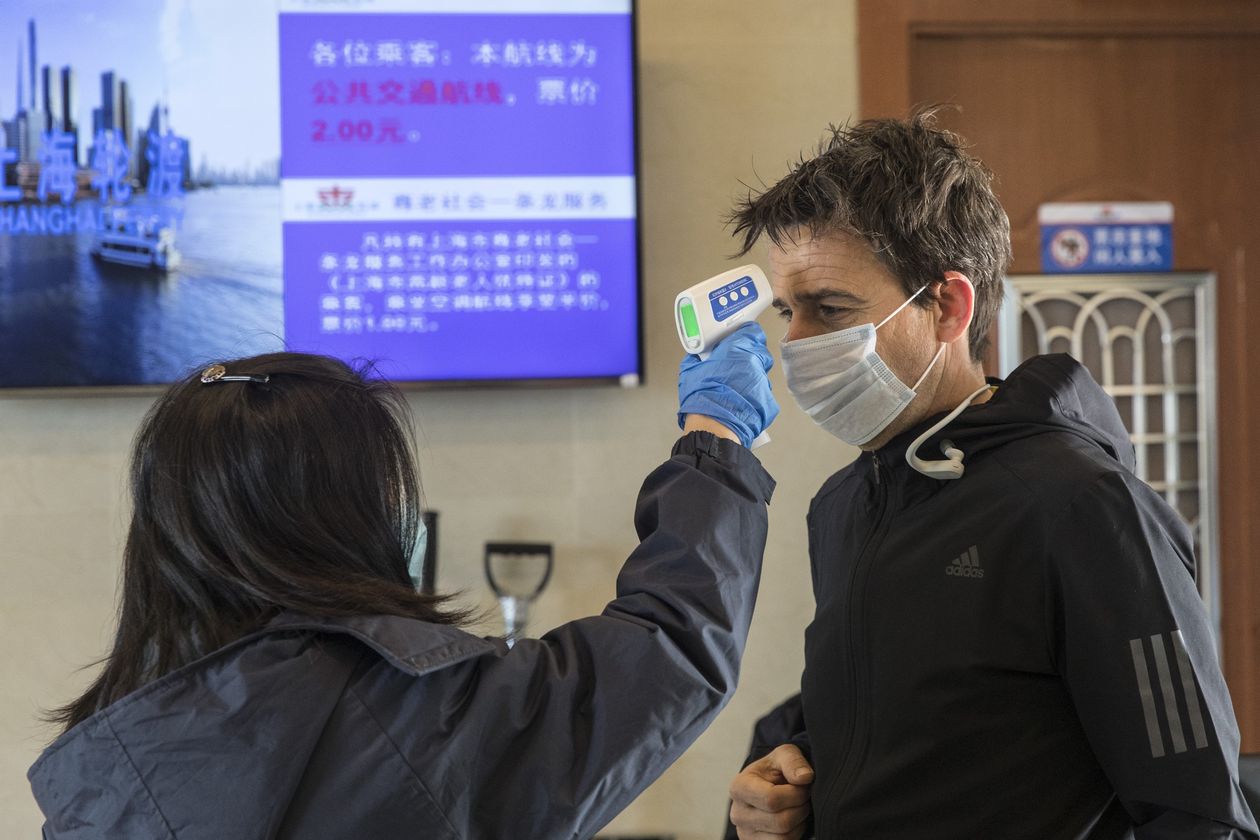 A transit worker takes the temperature of a passenger during a screening at a passenger ferry terminal in Shanghai, China, on Thursday. PHOTO: QILAI SHEN/BLOOMBERG NEW

Officials said the man, who is in his 60s, didn’t attend any mass gatherings. There are 21 people under investigation in Illinois for possible infection, Dr.
Ezike said, and local and federal health authorities are working to monitor close contacts of the second Chicago patient.

Nancy Messonnier, director of the National Center for Immunization and Respiratory Diseases at the CDC, called the coronavirus “a very serious public-health situation.” She added: “We’re trying to spark a balance in our response right now.”

The CDC said that people who had recently traveled should be vigilant for symptoms and signs of the virus, which include fever, cough and shortness of breath.

President Trump during a speech in Michigan said the administration is working closely with China and sought to minimize fears about the virus in the U.S.

“We think we have it very well under control. We have very little problem in this country at this moment,” Mr. Trump said, adding that the handful of victims are recuperating. “We think it’s going to have a very good ending for us. That I can assure you.”

On Wednesday, Mr. Trump announced a task force to address the coronavirus, which he said had been meeting daily since Monday.
The group is led by Health and Human Services Secretary Alex Azar.

Members of a House of Representatives panel briefed by federal medical officials Thursday said that traditional means of stopping infection are still the best guard against the virus’s spread.

Members of the subcommittee said federal officials appear to have the situation in hand and that there isn’t any need for a coronavirus “czar,” as was appointed during the Ebola virus epidemic in West Africa during the Obama administration.

A number of countries have pushed ahead with efforts to extract their citizens from central China.

The State Department on Thursday said it is planning a second evacuation flight from Wuhan for the hundreds of American citizens still believed to be in the city.

The Indian government is seeking permission from Chinese authorities to operate two flights to repatriate citizens from Hubei province, and will quarantine them for 14 days.