Social media followers are quite important to a number of celebrities because it shows the level of acceptance they have from fans and how much reach their activities would get.

Big Brother Naija 2020 winner and brand ambassador, Olamilekan Agbeleshe aka Laycon, recently celebrated the fact that he now had 700k followers on Twitter. 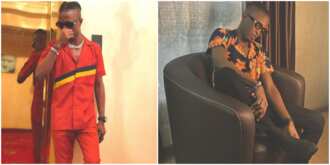 The BBNaija star broke records by becoming the first housemate ever to hit the 1m mark while still on the show months ago.

The rapper in a post which he shared on his official Twitter page was obviously surprised at the feat.

Shelore stated that the love from Laycon,s fans is the purest form of love.

Okoye prophesied that the musician would get to the 1m mark before the end of the year.

Victor said that no man should look down on himself, seeing as the rapper looked like he did not have a chance at the beginning of the show.