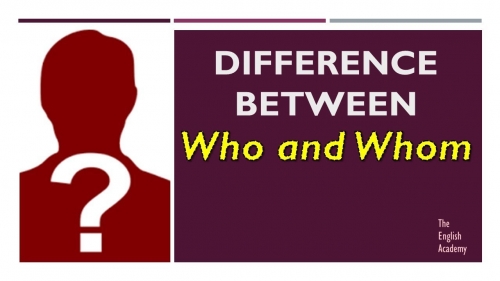 When To Use "who" Or "whom" In A Sentence. Read To Learn.

I stepped down from the copy department of The New Yorker almost two years ago, hanging up my parentheses and turning over the comma shaker to my successor, who I know will use it judiciously, but I still love the magazine and lose sleep when an oversight (as we prefer to call it) sneaks into its pages. Copy editors never get credit for the sentences we get right, but confuse "who" and "whom" and you are sure to be the center of attention, at least briefly. If you thought the "who" in the previous sentence should have been a "whom," you are not alone. Let's review.

But here's the rub: if I wrote "who" instead of "whom" here, nobody would care. A "who" for a "whom" is much more grammatically acceptable than a "whom" for a "who," which sticks to your shoe like something you stepped in that was not just mud under slippery leaves in the dog run. I could finesse the whole issue by writing that I turned over the comma shaker to a colleague I have known for years, doing without the relative pronoun, and nobody would miss it.

So why do we need this aggravation? Does civilization depend on the proper use of "who" and "whom"? Let's steel ourselves for a closer look.

A few copy editors have proposed a radical solution to the "who/whom" problem: kill off the "whom." Emmy J. Favilla, who formerly headed up the copy department for BuzzFeed, titled her 2017 style guide "A World Without 'Whom,' " and David Marsh, the former production editor of the Guardian, called his 2013 book on language "For Who the Bell Tolls." Both are clever titles, making jokes at the expense of "whom" while exploiting its negative capability. But the writers have a point: if we just used "who," we would never misuse "whom." In this way we would hasten the departure of "whom," which linguists predict will go the way of "thou" and "thine" any century now.

And yet there are those who believe in "whom" and wish to see it used correctly. June Casagrande, a prolific writer on grammar and usage, devotes a special section of her new book, "The Joy of Syntax," to "Common Mistakes with Whom and Whomever," and Bryan Garner, the closest thing we have in our time to a reincarnation of H. W. Fowler, devotes a column in the third edition of his Modern American Usage to instances of what he calls "the nominative whom." (I know there is a fourth edition, but I find the third more manageable to read in bed.) Most of the specimen sentences are from newspapers-the Rocky Mountain News, the San Francisco Chronicle, the Washington Post, the L.A. Times, the Minneapolis Star Tribune-though one is from a novel by the famously erudite William F. Buckley, Jr. The "who/whom" error is especially common in journalism because reporting, getting behind the news, often involves paraphrasing speech and attributing thoughts and feelings: "she thought," "he said," "they suspected" are locutions that occur frequently in news stories and to which readers and writers must be alert, because they introduce an object-whatever it is that a source thought, said, or suspected-in the form of a clause with its own syntax.

I have been avoiding this subject for months, because of an overwhelming feeling that in the current climate, actual and political, no one cares. But we have come to a sorry state when the news itself discourages us from caring about the way it's conveyed. A while back, I read a piece in the Oregonian about the state librarian, a woman who was getting fired-or, if you prefer, a woman whom the governor of Oregon was letting go-apparently for taking too long to finish some project. She had the support of her fellow-librarians, but government officials had grown impatient with her. After a debate in the state legislature, one state senator voted against the library's budget, but not because he had anything against the librarian. The article concluded, chillingly, "He voted on ideological grounds that he doesn't see a need for the State Library to exist, he said." This is exactly the attitude we're up against. Why do we need to keep "whom" on the job if it is not performing effectively? Rather than inquire into its virtues or lack of them, let's get rid of grammar completely! A fable for our times.

So does civilization depend on the vulnerable "whom"? Yes. No matter how bad the news, we must not stop caring. To paraphrase Carson, the butler on "Downton Abbey," "Keeping up standards is the only way to show the bastards that they will not beat us in the end."

Mary Norris began working at The New Yorker in 1978 and was a query proofreader at the magazine for twenty-four years. She is the author of "Between You and Me: Confessions of a Comma Queen" and "Greek to Me: Adventures of the Comma Queen."