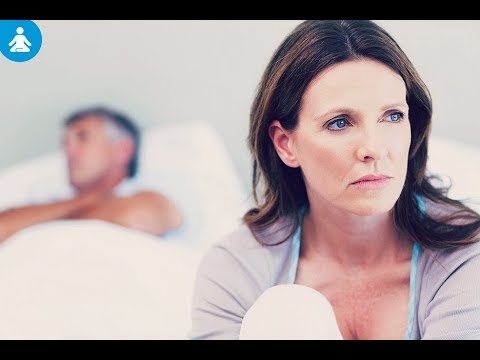 Earning
~4.6 mins read
Advertisement
In This ArticlePhysical Factors
Psychological Factors
BACK TO TOP
Lacking sexual desire, or perhaps experiencing desire but being unable to enjoy sex is very common. Many factors in a woman's life can interfere with sexual function, which often leads to lower quality of life for her and her partner. Research suggests that nearly half of all women experience at least one symptom of sexual dysfunction.1

Sexual dysfunction refers to a problem during any part of sexual activity, from arousal to orgasm. Physical factors such as illnesses, surgeries, and hormonal changes related to menopause are often implicated in female sexual dysfunction, along with psychological factors like depression, anxiety, stress and relationship difficulties. Here are some of the most common physical and psychological factors that may cause a woman to lack the desire for sex or experience challenges enjoying sex.

Removal of the uterus and ovaries causes a large decline in sex hormones. Hormone replacement therapy—with or without testosterone replacement—may help to restore sexual function in women experiencing sexual difficulty after this surgery.

Some women find that post-hysterectomy, they miss the contractions of the uterus they have previously associated with orgasm. Removal of the cervix may result in a change in the physical sensation experienced during deep penetration during intercourse. There is wide variation in sexual functioning post-hysterectomy.

Vaginismus is a persistent or recurrent spasm of the outer third of the vagina that interferes with intercourse. It causes vaginal intercourse to be painful or difficult, and can also prevent pelvic exams.

It can usually be treated by the use of vaginal dilators of increasing diameter, plus relaxation training. The success rate increases in couples where the partner is involved in the therapy process.

Advertisement
While treatment can help, it is important to note that some women have very intimate, loving relationships without intercourse.

When a woman approaches menopause, she begins going through profound hormonal shifts, including plummeting estrogen levels. This often results in hot flashes, vaginal dryness, night sweats, mood swings, and decreased sensitivity to sexual touch. Testosterone drops with age for both men and women, which can also reduce a woman's sexual desire.

Understand the Stage Before Menopause

In postmenopausal or perimenopausal women, estrogen replacement can decrease pain during intercourse and facilitate vaginal lubrication.2

Studies have also shown that testosterone increases libido in women, so if your decreased desire is due to a drop in hormones, it can very likely be resolved with testosterone. However, to date, these studies have used high doses of testosterone, which might lead to masculinization if taken for long periods of time.

Although DHEA is also a male hormone, there have been very few studies of its effect on women and none have shown that it improves a woman's libido.

If you are going through menopause, or you're in the years leading up to it and are noticing a change in sexual function, you might want to try increasing foreplay or sensual massage, which can boost the connection between you and your partner. You can also use lubricants and avoid sexual positions that allow very deep penetration.

Further, some drugs and substances like alcohol, gonadotropin-releasing hormone agonists, anticonvulsants, beta-blockers and certain antidepressants (SSRIs in particular) have all been known to cause, or at the very least, be partly responsible for female sexual dysfunction.

Sexual Abuse in Childhood or Adolescence

Childhood sexual abuse has been identified as a risk factor for sexual dysfunction in women. Desire and arousal problems are the most frequently reported by women with abuse in their pasts.3

Lack of trust in a relationship and/or a reduction in one's attraction to their sexual partner can cause or contribute to sexual dysfunction in women.

Other psychological factors like self-esteem and the fear of being vulnerable or letting go of control can cause sexual dysfunction.

An important thing to keep in mind about psychological factors is that sometimes it may be the dysfunction causing them and not the other way around.

Advertisement
It has been likened to a chicken-or-the-egg situation because it can be hard to distinguish the causes from the symptoms.
A Word From Verywell

Sexual response varies between women and within each individual, and sexual concerns are very common. Some sexual problems, while distressing, may reflect normal variations in a woman's life. Shifting one's focus to enhancing intimacy rather than having all interactions result in intercourse may help. Not all sexual concerns or problems are "dysfunctions."

Women need to pay attention to changes in their daily lives that may cause sexual dysfunction. In cases where medications cause sexual problems, the solution may be as simple as changing the medication or adjusting the dosage.

Don't be afraid to talk to your doctor and your partner. It can be difficult and uncomfortable to initiate a conversation with a doctor about sex, but the majority of women can be helped if they are willing to talk openly to their healthcare provider to determine the best treatment for their specific problem..