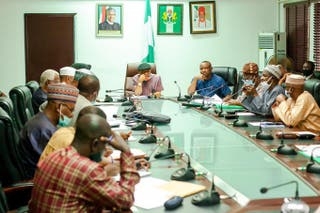 FG offers ASUU cumulative sum of N65bn to end strike
â€¢Adjourns meeting to Friday next week
The Federal Government on Friday has made an additional sum of N15 billion to the Academic Staff Union of Universities (ASUU), making it a cumulative sum of N65 billion for the revitalization of the university system and settlement of the controversial Earned Allowances.
This was disclosed after several hours of deliberations between the Federal Government team, led by the Minister of Labour and Employment, Dr Chris Ngige and the ASUU, led by its President Prof.

Biodun Ogunyemi.
However, the parley between the government and ASUU has been adjourned till Friday next week for the stakeholders to further concretize the resolutions.
As the parley between the two groups continues, ASUU has also insisted that the strike will go on until final resolution of all the issues in contention.
On the issue of highly contentious Integrated Personnel Payroll and Information System (IPPIS), ASUU informed the meeting that it had carried out a demonstration of the University Transparency and Accountability Solution (UTAS), to all stakeholders and end-users on Thursday 5th November at the National Universities Commission NUC, where some stakeholders raised questions that had been addressed.
The meeting agreed that going forward, all stakeholders must be carried along in this process to ensure transparency.
On withheld salaries and non-remittance of check-off dues, they agreed that the Federal Ministry of Education and Federal Ministry of Labour and Employment should reconsider the "No work, no pay" policy of the government with a view to getting approval for the withheld salaries to be paid.
A communique issued at the end of the marathon meeting read: "It was also agreed that the mode of payment applied for the payment of those that had not been captured in the IPPIS platform between the months of February and June 2020 be adopted for the purpose of payment during this transition period.
"On the demand by ASUU for the payment of check-off dues, the Accountant General of the Federation requested that ASUU and other unions should provide his office with the necessary information and dedicated account details in writing to facilitate the deductions and remittance of the check-off dues."
The Federal Government had earlier offered the striking teachers N50 billion for Earned Allowances and Revitalisation Fund but had insisted that IPPIS would be the platform for payment, the position rejected by ASUU and has since remained opposed to it.
.

Sgpeterson (Basic)   2 yrs
When will this their saga ends?
0
6692
FGoffersASUUcumulativesumofN65bntoendstrikeFidelity.html
225452