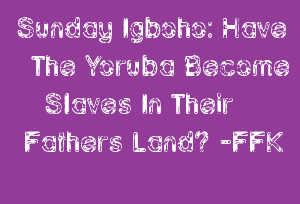 Sunday Igboho: Have The Yoruba Become Slaves In Their Fathers Land? -FFK

Have The Yoruba Become Slaves In Their Fathers Land? -FFK â€“ Present Nigeria

For soldiers to escort murderous Fulani herdsmen back to a community in Ogun state from which they were earlier evicted and then to publicly whip members of that community for evicting them simply beggars belief.

Have the people of the South West now become slaves in their fathers land? Have we finally been conquered and occupied?

It is utterly mind-blowing. It is wicked. It is evil. It is unacceptable. How much more bloodshed, carnage, violence, insults and humiliation are the people of the South West expected to take? Soldiers are whipping our people like dogs in the street in order to reinstate those that are killing, raping and maiming them?

It is only when you have met someone whose whole family has been raped and butchered by Fulani herdsmen that you will know or appreciate what is going on in the South West.

It has become a daily occurrence.

They have kidnapped, maimed and slaughtered traditional rulers, businessmen, politicians, elder-statesmen, farmers, artesans, lecturers, teachers, students, artists, pure-water sellers, market women, hairdressers, the rich, the poor, women, children and so many others including the beautiful daughter of Baba Reuben Fasoranti, the leader of Afenifere.

For Miyetti Allah, the ACF, the NEF or anyone else to say that the Fulani "own all the land in Nigeria" and that we are "being provocative", "beating the drums of war" and "asking for a second civil war" by calling for the arrest and eviction of the killer herdsmen and murderous thugs from our land is insulting and provocative.

Only the ignorant, cowardly and uninformed talk like that. Only those that are secretly behind the carnage, that profit from it and that sent the herdsmen to unleash terror on us can say such things.

Some Yoruba leaders want to be President or Vice President in 2023 and are therefore prepared to keep quiet and tolerate this rubbish that is being done to our people. I am not one of those leaders. Nothing in this world can make me trade in the blood and lives of my people.

Nothing will make me turn a blind eye to their sufferings or betray them.

For me my people come first and politics or political expediency comes a distant second. I will speak the truth no matter the consequences, no matter what it costs me and no matter whose ox is gored.

And the truth is that Chief Sunday Igboho, Governor Akeredolu, Afenifere, Professor Akintoye, Mazi Nnamdi Kanu, SOKAPU, the Southern and Middle Belt Leaders Forum (SMBLF) and all the other individuals and bodies that have spoken out against the murderous activities of the herdsmen in the South West and elsewhere are right.

And those that have supported or attempted to rationalise the criminal behaviour of the killers in the name of political correctness or political expediency are treacherous, shameless and irresponsible.

If you are a Yoruba man and you want to be President or Vice President I wonder whose affairs will you be presiding over and who will you lead or represent at the national level if all your Yoruba people have already been killed?

Soon we shall start calling the collaborators and coward's out by name. You betray your own just for support, acceptance and promotion from northerners whereas no northerner worth his salt will ever sell his own people out for you? Nothing could be more reprehensible than that.

Shakespeare wrote 'cowards die many times before their death' and Soyinka wrote "the man dies in him who remains silent in the face of tyranny and injustice". They were both right.

The man has died in too many of our leaders today and the time to speak out is now. We all need to take a cue from Sunday Igboho.

Enough is enough. Too much blood has been shed and too many lives have been taken by these herdsmen in the South West and elsewhere. They kill in the North, the Middle Belt, the South South, the South East and everywhere else and they do it without remorse and with total impunity.

Peace-loving and law-abiding Fulanis are welcome in the South West but those that kill, steal, rape and destroy must leave and they must be brought to justice by the authorities. If this does not happen expect many more Sunday Igbohos to rise up.

The worst culprits in all this are the Buhari administration who are complicit in these crimes and in this ethnic cleansing, mass murder and genocide. I say they are complicit because they have refused to disarm the perpetrators, arrest them or bring them to justice despite the fact that it is their constitutional duty to do so.

They have failed to maintain law and order and to protect the lives and property of the Nigerian people and they continue to pamper and encourage the killer herdsmen.

The Presidency no longer speaks for the Nigerian people but only for Miyetti Allah and the Fulani herdsmen. This is a tragedy of monumental proportions and no matter what they say they will never change.

Femi Fani-Kayode is a former Minister of Aviation in Nigeria