I’m Going To Scatter Everything, I’m Done: Annie Idibia In Tears, Claims 2baba Sneaked To US To See Pero

The drama between Annie Idibia and her husband 2baba is far from coming to an end as an audio recording of the actress has been spotted on social media.

Annie was in tears as she was heard shouting that she would scatter and ruin everything. 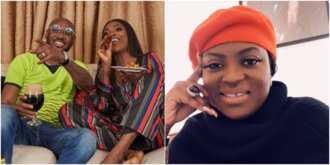 Annie Idibia threatens 2baba as she claims he sneaked to the US to see Pero. Photos: @annieidibia1, @perosaiyemi

Annie Idibia cries out in a leaked audio recording

The mother of two, who was obviously in pain, was heard saying that her husband planned with his manager and fled to the US to see his baby mama Pero.

"I'm going to scatter everything. I'll ruin everything. Nobody knows the wrath of an angry woman. My husband told me he had a shoot today and packed his things and his cousin helped him plan it.

His family does not love me, they hate me. They've been giving me hell for the past years. My husband is on his way to America. He planned with Frankie and Efe Omoregbe. I don't deserve this.

He thinks I'm in his way. He's on his way to America without telling me. He's going to see Pero."

Listen to the audio below:

"Love is not always enough!"

"I can feel her pains. I pray things get better with her family."

"Meaning the guy has been going through hell and his bro didn't lie at all.. 2baba issa cool guy if not himself beat and chase her away!! Rather he left the house for she and her mum."Idibia saga: Annie’s brother gives 2baba’s brother 24 hours to apologise for disrespecting their mum

"Sometimes love is not enough."

"Annie stay strong.. I feel so bad for her."

"This lady is going through too much mentally. I hope God restores peace in their household. So much pain and agony In her voice. Love you Annie!"

"Why Tuface no go run? Make Annie kee him for us?"

In fact, the father of seven made a post online and it was not in any way related to Annie's drama.

2baba, who just released a song titled Searching, posted a video of the music on his Instagram page.

The musician then urged his fans and followers to stream the music.