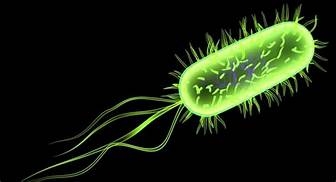 Characteristics Of Eschericia Coli,salmonella And Shigella And Their Relationship To Dysentery And Diarrhea

INTRODUCTION
Bacteriology is the study of bacteria. There are few bacteria which cause either diarrhoea, dysentery or both. Diarrhoea can be defined as watery bowel movement 3 or more times in a day (WHO, 2019).Dysentery can be defined as an intestinal inflammation primarily of colon. It can cause mild or severe stomach cramp and severe diarrhoea with mucus or blood in the faeces (Alana Biggers,2017).Diarrhoea and dysentery are one of those medical conditions which are often used as synonym terms but they both have clear differences. The stool of diarrhoea is watery with or without cramps and pain but in dysentery there is mucoid stool that is presented with blood(Medimoon,2012).Example of bacteria that cause diarrhoea,dysentery or both include Escherichia coli,salmonella and shigella.

DISCUSSION
Escherichia coli(E.coli)
E.coli is a type of bacteria that normally live in the intestine.

It is also found in the gut of some animals. Most of us associate E.coli with food poisoning but you can also get pneumonia and UTI too from different types of the bacteria. In fact, 75 to 95 percent of UTI are caused by E.coli.(Sabrina,2018)

Characteristics of E.coli
E.coli is a gram negative bacteria in the family Enterobacteriaceae. It is rod shaped, non spore forming, motile with peritrichous flagella or nonmotile, and grows on macConkey agar (Wilson, 2001).They do not produce enterotoxin (drew, 2001).

Epidemiology
E.coli primarily cause diseases in neonates and young children, with most cases occurring in children<2 years old and particularly in those >6 months old(Nataro,2007).Disease can occur in adults if sufficiently high inoculants are ingested(Bopp 2007).Outbreaks have occurred in nurseries and day care centres and in adults that have consumed contaminated food from a buffet(Fields,2007).In developing countries, E.coli is highly prevalent and is an important cause of childhood diarrheal disease and dehydration associated deaths(Kaper,2007).Studies in Brazil, Mexico and South Africa have shown that 30 to 40 percent of infant diarrhoea can be attributed to E.coli(Strockbine,2007).

Mode Of Transmission
Contaminated food, water and fomites serve as vehicles for fecal/oral transmission of E.coli(Wilson,2001)

Clinical signs and symptoms of individuals infected with E.coli     Nausea, vomiting, stomach cramps, diarrhoea that often is bloody ,fever of about 100 F to 101 F, Malaise, loss of appetite, mild dehydration(Sabrina,2018)

How E.coli is identified in the lab Definitive identification is based on the isolation of the organism in the microbiology lab from clinical specimens such as blood urine, sputum or other fluids.

Advertisement
Lumbar puncture and a CSF positive for E.coli establish its presence. E coli can be identified based on findings from serotyping, assay of adherence and DNA probes (Tarun, 2019).

Treatment and clinical management of patients with E.coli infection
Treatment with trimethoprim/sulfamethoxazole or quinolones reduce the duration of the diarrhoea(Baylis,2006)
Treatment of fluid and electrolyte loss is usually achieved through oral rehydration(Penn,2006).The use of WHO oral rehydration has been recommended(Thielman,2006).Intravenous rehydration may be necessary for infants, individuals with excessive vomiting ,or those with severe dehydration(guerrant,2006).Bismuth subsalicylate may decrease the amount of diarrhea and the duration of disease(Jenkins,2006).

Shigella
Shigella is a genus of bacteria that is Gram-negative. Its characteristics include that its facultative anaerobic, non spore forming, nonmotile and rod shaped. (Ryan,2004).

Epidemiology
It is common in developing countries where sanitation is bad.10 to 15 percent of enteric disease and 55 percent of bloody diarrhoea or dysentery of young children can be classified as shigellosis and the occurrence of these infections decreases significantly after five years of life(WHO,2019)

How Shigella is transmitted
It is transmitted by the fecal-oral route, including through direct person to person or sexual contact or indirectly through contaminated food, water or fomites.(CDC,2019)

Clinical diagnosis
Confirming shigellosis involves taking a sample of your stool to be tested in a lab for the presence of shigella bacteria or their toxin(Mosby,2016)

Treatment and clinical management
The clinician should rapidly assess the patients fluid and electrolyte status and institute parenteral or oral hydration along with antipyretics as needed. Nutritional supplementation of vitamin A can hasten clinical resolution in malnourished children.

Conclusion
Shigella and E.coli are both causes of diarrhoea and dysentery and they both produce a potent shiga toxin during infection that cause severe and life threatening disease(Anita,2019)