On News You May Have Missed: Out Of Three People Who Lived In A Village, Two Were Killed

Dobrusa, Moldova: Thirty years ago, the village of Dobrusa had about 200 residents. At the start of this year, it had just three.

Then two were murdered.

And now there is just one: Grisa Muntean, a short, moustached farmer often found in a flat-cap, a checked shirt and a ripped pair of blue trousers held up by a drawstring.

For company, Muntean has his two cats, five dogs, nine turkeys, 15 geese, 42 chickens, about 50 pigeons, 120 ducks and several thousand bees. The other humans have either died, left for larger towns and cities in Moldova, or emigrated to Russia or other parts of Europe.

"The loneliness kills you," Muntean, 65, said on a recent afternoon.

His former neighbours' houses are vanishing almost as fast as their owners. With few animals to graze the roadsides, and with only Muntean to prune the orchards, the buildings are sinking below a canopy of walnut groves and apple trees.

Dobrusa (pronounced Doh-BROO-shuh) was once a village of 50 houses that lined two parallel streets at the bottom of a shallow valley. Like many settlements across Moldova, it emptied out after the fall of the Soviet Union in 1991, an exodus mirrored across Eastern Europe, which has the world's fastest-shrinking population.

Now only a few corrugated iron roofs can still be seen in Dobrusa, poking above the undergrowth. They are visible from the dirt track that connects the village to the nearest asphalt road.

Even the village graveyard, set on the other side of the valley, is slowly receding into an undergrowth of nettles and brambles, grass flowers and cow parsley.

Plants like these are the closest Muntean has to neighbours.

"When I work, I speak with the trees," he said. "With the birds, with the animals, with my tools.

There is no one else to talk to."

Until February, Muntean relied on the company of Gena and Lida Lozynsky, a couple in their early 40s who lived at the other end of the village.

The Lozynskys helped Muntean tend his small holding, and kept an eye on his home when he took his eggs and vegetables to the area market. The trio spoke, at least by phone, on a near-daily basis.

But one Sunday in February, the Lozynskys stopped answering Muntean's calls. He heard nothing from them on that Monday. When they failed to call him back on that Tuesday, he assumed he had done something to annoy them.

On the Wednesday, after a tipoff, the mayor of the surrounding area, Grigore Munteanu, visited the Lozynskys' home. In their garden, the mayor found the couple's cow, its udders unmilked in days. Inside the cottage, he found their half-naked corpses, cold and bloodstained, lying on the wooden floor.

An investigation found that the couple had been bludgeoned to death by a drunken labourer, after he and a fellow farmhand had tried to rape Lida Lozynsky, the mayor said.

Six months on, their home is almost as they left it, with clothes strewn on the floor and a box of powdered milk in the front window. 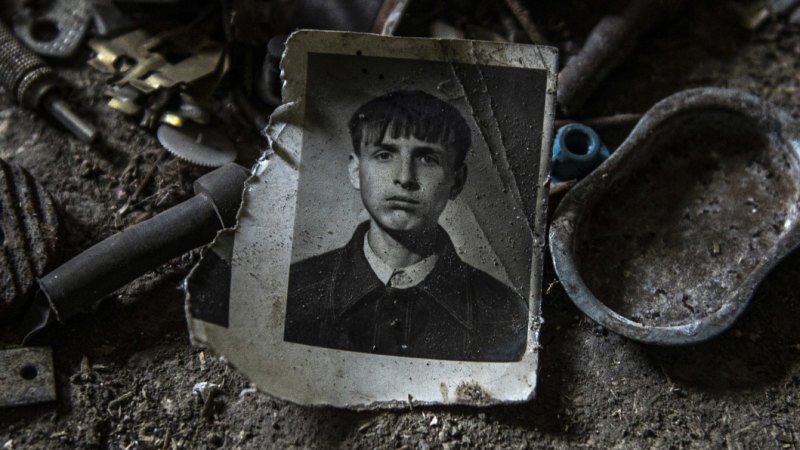 Their garden is already wild. Up on the hillside, their graves are being slowly submerged by the weeds.

Within a few years, a visitor may struggle to find the gravestones, let alone remember who was buried there; Gena's mound is wrongly marked "Gheorghe".

Now, Muntean is the last survivor of a village first settled in the 19th century, when the area was part of the Russian Empire. According to local folklore, its first residents were Ukrainians who hoped to reach the United States (but missed their boat), and Moldovans who had fallen out with a landowner in another area.

The village prospered in the decades after World War II, when Moldova was folded into the Soviet Union. Dobrusa gained a shop, an elementary school, a summer camp for children and a village hall that showed films on Sundays. The collective farm provided work for all in the nearby wheat fields, vineyards and orchards.

But the collapse of the Soviet Union led to the decline of the collective system and the privatisation of the agriculture sector. To find jobs, many Moldovans left their villages — and to find higher salaries, thousands left the country altogether. When Muntean, who had lived in a neighbouring village, arrived in Dobrusa in 2000 to set up a small sheep farm, the village's population had fallen to around 70, Muntean reckoned.

Between 1990 and 2015, Eastern Europe's population fell by 18 million people, to 292 million. About one in four Moldovans lives abroad, according to estimates by the UN Development Program, while the resident population fell by 500,000 to 2.8 million between the censuses of 2004 and 2014.

In Dobrusa, most of those who remained were pensioners.

The school closed in the late 1990s, along with the shop, the camp and the village hall.

"It started to feel like a ghost town," said Valentina Artin, who was born here in 1939. "It was like a desert."

Artin left for the nearby village of Vadul-Leca in 2012 with her grandchildren, leaving no more than 20 residents behind. Then the Ialii family left, and the Petermans. Old Colea Masalkoski passed away, aged near 100, and so, too, did Gena Lozynsky's mother, Klava.

Muntean's wife left him, and their four children, who had never actually moved to the village in the first place, emigrated to Spain.

By 2016, Dobrusa had three villagers.

Even Muntean's sheep had gone; with so few villagers to help him, he gave up the sheep farm in 2013. Now even Muntean is considering leaving for a nearby town.

Yet, for all his loneliness, Muntean says there is a kind of joy to the peace and solitude. He grows his own vegetables and makes his own honey. He lives among nature, disturbed only by the sound of his geese, in a valley he describes as a kind of heaven.

Besides, Muntean doesn't always feel so alone when he sits in his cluttered farmyard — next to his chicken coops, his greenhouses and his broken-down Lada — and gazes up at the village graveyard.

"Gena always said he'd be watching over me," Muntean said.