A lawsuit on behalf of Nnamdi Kanu, filed by his lawyer Kingsley Kanunta has shown that the leader of the Indigenous People of Biafra (IPOB) was extradited from Kenya.

The suit was filed against the Kenyan government for what the embattled secessionist described as unconstitutional extradition, The Nation reports.

According to the petition, Kanu was in the African nation to seek medical attention for a heart challenge and for “Indigenous People of Biafra-related work”. 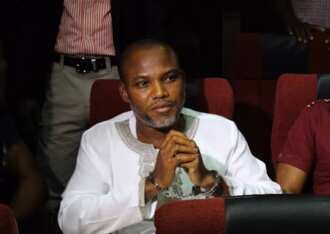 The court document showed that the IPOB leader was extradited from Kenya (Photo: Ohanaeze Ndigbo)

Revealing further, the suit seen by Punch said the agitator arrived at Jomo Kenyatta International Airport in May from Kigali, Rwanda, on an East African tourist visa.

“The subject is believed to have been apprehended at the airport on June 19, 2021, and unlawfully detained for several days after which he was illegally and stealthily extradited to Nigeria without his British passport in utter-non-compliance with laid down processes of laws in Kenya."

Among those mentioned as respondents in the suit are Kenya’s Interior CS, director of immigration, director of criminal investigations, OCPD Jomo Kenyatta International Airport, and Attorney-General.

Powerful senators with new strategy to save IPOB leader

Meanwhile, senators of southeastern extraction on Wednesday, September 15, took the initiative to set up a panel that would look into the case of Kanu.

The plan was to negotiate with relevant federal governmentagencies on the continuous detention of the IPOB leader.

Those who were behind the move met at the Abuja residence of a former Senate deputy president, Ike Ekweremadu.

The Igbo federal lawmakers said the aim of interfacing with the agencies is to find a political solution to the issue.

A part of the communique on the issue read:

“We elaborately discussed the issue of Mazi Nnamdi and resolved to intervene. To this end, we resolved to set up a committee to constructively interface with relevant stakeholders, the federal government, and its relevant agencies towards finding a political solution. We will keep Ndigbo abreast of developments in regard."