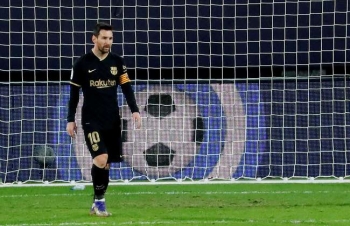 Barcelona's 2020/21 campaign in La Liga slumped to a new low against Cadiz.

The Blaugrana have been licking their wounds ever since the catastrophic end to the 2019/20 season, which saw an 8-2 defeat to Bayern Munich and Lionel Messi pushing for a transfer.

Quique SetiÃ©n was giving his marching orders and replaced by club legend Ronald Koeman, but the Dutchman has experienced a rocky few months in the Camp Nou technical area.

In fact, many would argue that Barcelona's hopes of regaining the La Liga title are already dead and buried as they stew in seventh place with as many defeats as victories.

However, defeat to Cadiz, who were promoted from the Segunda DivisiÃ³n last season, marked the nadir of what is turning into Barcelona's worst ever domestic campaign in recent memory.

Ãlvaro GimÃ©nez fired the home side into the lead after just eight minutes, before Alvaro Negredo notched a second-half winner to cancel out a Barca equaliser that came courtesy of an own goal.

It's an incomprehensible defeat, regardless of Cadiz's strong start to the season, considering the Catalans boasted a starting XI including Messi, Antoine Griezmann and Philippe Coutinho.

And the failure of this world-class line-up to even claim a point from the Nuevo Estadio Ramon de Carranza had Koeman pulling his hair out in the post-match interviews, according to the Daily Mail.

"We lost due to an unexpected mistake that you cannot make," Koeman fumed. "It came from not being focused. The attitude wasn't good tonight, and not just from the defenders.

"It's very hard to explain some of the goals that we've conceded. I think it might be because of a lack of concentration. We lack aggression without the ball. That might be why we concede."

It will, therefore, come as no surprise that Marca's rating system for Barcelona players after the defeat became quite a volatile place with the Camp Nou faithful dishing the dirt on their squad.

The format allows supporters to either up-vote or down-vote everybody who played in the La Liga disaster with the scores being aggregated to provide a ranking of stars from worst to best.

We know what you're all thinking: where did Messi wind up? Well, we'd kindly advise the six-time Ballon d'Or winner to give the voting a swerve because it doesn't reflect well on him at all.

That's because the Argentine has been postered as only Barcelona's TWELFTH best player on the night, which is pretty damning when you consider only 15 players were deployed by Koeman.

So, who managed to clamber their way ahead of Messi? Be sure to find out by perusing the full voting down below with all results correct at the time of writing:

Oof. It's clear to see that Barcelona fans weren't chuffed with the output of their skipper, which is particularly surprising when you consider he was rested for the mid-week Dynamo Kyiv clash.

That's not to mention the fact Messi registered the most shots, shots on target, completed take-ons and fouls won of any player on the pitch, though he did fail to notch a goal or assist.

In fact, Messi has only attempted ten or more shorts in four La Liga games across 2020, with Cadiz proving the latest, but the 33-year-old has failed to find the net on any of those occasions.

An interesting mix, for sure, so we'll allow you to make up your own minds by checking out Messi's individual highlights from the upset down below:

Perhaps the vote has been hijacked by a few Barca fans who are still bitter about Messi's actions this summer and we're now just a few weeks away from him being able to contact other clubs.

If supporters want to boost their chances of Messi sticking around for a little longer, they might be better off slipping him a few more up-votes in the coming games than they did for the Cadiz loss.