Bayern Munich opened their Champions League campaign with a 3-0 win against Barcelona at the Camp Nou.

La Blaugrana are trying to cope without their former talismanLionel Messi as they surrendered to the superior advantage of the Bavarians. 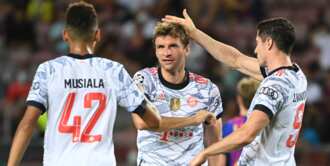 Thomas Muller and Robert Lewandowski's brace was enough to put Barcelona to sleep at the Camp Nou. Photo by Sven Hoppe

Summary of the game

Ronald Koeman's men controlled the game in the early minutes of the encounter but failed to hit the target.

But the visitor drew first blood as Thomas Muller's shot took a heavy deflection on Eric Garcia as it beat Marc Andre Ter Stegen who dived the wrong way to make it 1-0 in the 33rd minute.

Barca were without Sergio Aguero and Ousmane Dembele and they were made to pay dearly as Bayern doubled the advantage in the second half.

Robert Lewandowski pounced on a rebounded shot that cannoned off the post as he stamped the ball into the back of the net in the 56th minute to make it 2-0.

The Polish striker completed his brace five minutes from time as he showed composure in the box to score his team's third to make it 3-0.

In the other group fixture, Dynamo Kyiv were held to a goalless draw by Benfica as the result put Barcelona at the bottom of the group.

Why Aguero rejected Messi's No. 10 shirt

Meanwhile, Legit.ng had earlier reported that Sergio Aguero who is an Argentine footballer has explained that he rejected to pick Lionel Messi's jersey number 10 at Barcelona because of the respect he has for the now Paris Saint-Germain star.

The former Manchester City striker joined Barcelona with the hopes that he would play with Lionel Messi at the Nou Camp, but the six-time Ballon d'Or winner left for PSG.

Lionel Messi never wanted to leave Barcelona and the Argentine even accepted a paycut for him to remain at the Nou Camp, but Barcelona's financial issues made it difficult to register him.

Even Sergio Aguero was recently registered by Barcelona as the club's chiefs continue their fight to overcome their financial ordeal.