The newspaper stated that the priest was killed in the early hours of Tuesday, September 14. 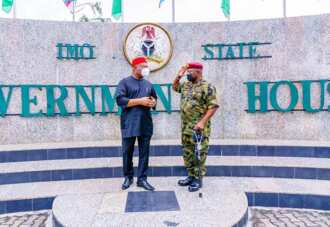 Imo state under the watch of Governor Hope Uzodimma has become a hotbed of violence. Photo credit: Hope Uzodimma

Merenu until his death was the priest-in-charge of St Andrew’s Anglican church, Ihitte-Ukwa in the Orsu local government area of the state.

A member of the church whose name was not revealed was cited saying that the attackers stormed the church premises, butchered the priest and set his vehicle on fire before fleeing.

“The priest in charge of St Andrew’s Anglican Church in Ihitte-Ukwa in Orsu Local Government Area of Imo state was killed this morning.“His attackers stormed the church compound where he lived, butchered him and burnt his car before running away.”

Probable reason for the murder

Asked what could be the reason for the murder, the source said:

“The church has a school on the premises. His attackers might have been angry that the slain priest was giving security protection to the students of the school who were writing this year’s WASSCE for Senior Secondary schools.”

The ugly incident was reportedly confirmed by another senior member of the church in Orlu Anglican diocese.

He was cited as saying that the diocese had been thrown into a morning mood.

Abattam added that investigations on the incident had commenced.

In another related development, suspected bandits have killed a pastor with the Evangelical Church Winning All, Rev. Silas Ali, in the Zango-Kataf local government area of Kaduna state.

The pastor was hacked to death on Saturday, September 11.

Legit.ng gathers that the ugly incident has also been confirmed by the state's commissioner for internal security and home affairs, Samuel Aruwan. Aruwan said Governor Malam Nasir El-Rufai was pained by the attack and condoled with the church and family of the slain pastor.