Folarin Balogun's brother has slammed Arsenal manager Mikel Arteta over his style of play especially in the striking position.

The Gunners have only been able to produce one goal in fourPremier League games having conceded nine already so far this campaign.

Victory over Norwich City was however a relief for the Spanish-born tactician who has been under immense owing to their three consecutive defeats at the start of the season. 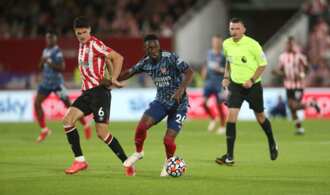 A lone strike from Pierre-Emerick Aubameyang was all the North London club needed to down the Canaries at the Emirates and seal the three points.

Meanwhile, the 20-year-old striker has not featured for the Gunners since their 2-0 home defeat to Chelsea in their second league game.

“You can’t blame just the player, it’s the system. If you look at that striker problem in terms of chances created, it’s not just Folarin.

Legit.ng earlier reported that Mikel Arteta welcomed the return of three players which played a huge role in their first win of the Premier League season.

The Gunners defeated Norwich City 1-0 over the weekend to end their three games losing streak so far this campaign.

Pierre Emerick Aubameyang scored the only goal that separated the two teams as Gabriel Magalhaes, Thomas Partey, and Ben White played a part in the game after their return from injury.